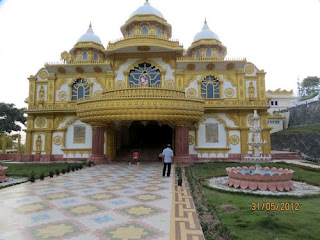 Sources indicate that nobody knew of Sai Baba’s parents, birth or birth place. Enquiries made with Baba and other close devotees indicated no clear answer about these matters. One account says that Baba was reported to have been born approximately in 1838 in early 19th century in a Brahmin family in Pathri village in erstwhile Nizam State, birth due to a boon granted by Lord Shiva and Parvathi to His mother.  Just before His birth, His father left the home to lead the life of a recluse. After His birth, mother left the boy under a tree and went in search of her husband. Then a Muslim couple picked up the boy and adopted Him. In 1842 the adopted father died. Then the boy was handed over to one Gopalrao Deshmukh, a rural chieftain and the boy was placed under the care of Venkusa Guru.   This is all based on the information gathered and is not based on any proof and not confirmed. Based on the various utterances expressed on different occasions by Baba Himself, we are forced to infer that He was not born with the help of any womb and He was there in the world since a long time. While talking to Nana Joshi, Magistrate and Asst. Collector who came from Dhulia Court to Shirdi in 1914 as Commissioner to enquire about a theft committed by an accused, Baba told him that His age was several lakhs of years and that His religion was Kabir. These also confirm that Baba was not born as an ordinary mortal.  Baba first appeared under a mango tree by the side of a road in the Nizam State in the same way in which Namdev and Kabir were located. Namdev was found by Gonayee as a child floating in river, Bhimrathi and Kabir found by Tamala in a shell in river, Bhagirathi.  Baba had no name earlier till He appeared in Shirdi. When He entered Shirdi village Mhalasapati welcomed Him as “Ya Sai” or “Aao Sai”(meaning “Welcome Sai”)  and  with  that name  He became known as Sai Baba.

He did penance for 12 years. Later Baba first appeared in Shirdi as a very handsome lad of 16 years in about 1872 and left Shirdi for somewhere for about three years. Some others expressed that He actually came to Shirdi in 1854 as a lad of 16 years. This information is confusing in itself and when cross checked with the above data does not confirm the above birth details of Baba and hence it is not sure whether he was born to any lady at all.  Nobody knew unequivocally about His parents, His birth and birth place. About His origin, nothing is certain due to absence of any proof and also due to contrary indications. In this regard the contribution made by Das Ganu, a staunch devotee of Baba, who made extensive enquiries about the antecedents of Baba at Selu village is worth mentioning. Das Ganu by his nature, would not accept any statement/view expressed by any body as granted unless tested by him and he would accept only after examining it critically after enquiries. While he was in service he went to Selu village and made enquiries from the villagers and also from Srinivasa Rao, the Subedar of Selu in 1903 about Baba’s early life and Baba’s Guru, Venkusa and in the enquiries he came to know that Venkusa was no other than Gopalrao Deshmukh. Das Ganu was in the Police Department and was also doing detective work and consequently he developed a questioning mind. The villagers also told Das Ganu that there was an old saint with a boy who was being trained up by the Saint. Then the Saint passed away by Ascension and the boy left the place. The villagers told him that this had happened some 100 years ago, as expressed to Narasimhaswamiji who interviewed Das Ganu in 1936. This revelation by Das Ganu helped bring out clearly about the early life of Baba for which all the devotees are ever thankful to him. Das Ganu made enquiries while in service in 1903 and left the service during the end of 1903. The villagers of Selu told him in 1903 about these incidents of Baba which took place some 100 years back as told by them, i.e. must have happened around 1803 and during that year Baba was seen as a boy with the Saint by the villagers of Selu as stated by the villagers and this indicates that Baba was there prior to 1803. This also again contradicts the birth details of Baba and His age.

The birth and parentage of Baba are therefore shrouded in mystery and no person, however closely associated with Baba, expressed clearly and correctly in this regard. And unequivocal proof was not forthcoming about these matters.  It deserves to be mentioned here the views of Swami Sai Sharan Anandji who wrote that “Baba when asked, His only reply was ‘Brahma is my father, Maya is my mother and this Universe is my house’, that He descended on this earth through some human mortals has not yet been established through reliable source. No conflict of opinion exists however as to His being an extraordinary Incarnation of God…..”  At one stage, Baba said, “I am your servant’s servant”, next said, “I am a servant of Allah” and again said, “I am He”. At these statements, human intellect fails to understand these statements but all these statements are factual realities which are universally true and were brought out in His multiple roles in the past and even now. Baba Himself once told Das Ganu Maharaj that He(Baba) was  Haq  (Almighty  God) and  having  been convinced about this, Das Ganu, while performing kirtans, was  eulogizing  Baba as   Embodiment  of  God.

Another view expressed by Upasani Baba also deserves to be mentioned here.  Upasani   Baba during  his three years of novitiate under the guidance of Baba in Shirdi, had plenty of opportunity to  know  about  Sai Baba and his miracles and his merciful grant of powers to Upasani Baba and got convinced  that  Baba  was God in human form in Shirdi and accordingly Upasani Baba composed a prayer of hymns in praise  of Baba, the eighth verse of which reads as: “Sai Baba is the unborn, the veritable Brahman”—which means that Baba was not born and that Baba was Almighty God. Some  other hymns composed by Upasani Baba, also mention that Sai Baba is the original Sat Chit Anand Swaroop, the primordial cause of original existence and destruction of the Universe and Sai Baba had appeared  as a Human Being due to the ardent desires of his devotees to see Him as such.

As Dhumal, a famous   advocate  and  an  ardent  devotee  of  Baba  had expressed once before a Judge, a senior European  Officer, while  handling a criminal case  that   Baba  was  neither  a Muslim  nor  a  Hindu and  was beyond both of  them.  This  had  happened  in 1911.   Though dressed like a Muslim fakir,  Baba bore the  caste marks of a Hindu . He was a Hindu fakir who lived  in a Masjid called  Dwarakamai.  Dixit, another  famous advocate and an  ardent  devotee  of Baba,   was  of  the   view   that   Baba   was  born ayoniya which literally  means  without a human womb. He had intimate knowledge  of  the  Gita,   but also  recited  the  chapters of Koran in  the  company  of  Muslims.  He   had mastery over many  languages and how  He  acquired them  was shrouded in mystery.

Also Baba was not an evolved saint but was a God Incarnate. Baba is ever alive and even now He takes any form and appears before an ardent devotee. He will also appear in dream and talk to the devotee.  He transcends both life and death.  Seeing Baba’s photo is equivalent to seeing Baba in person based on several utterances expressed and instances quoted by Baba.

Chandbhai Patil was a Village Officer of Dhup-khed village in Nizam State. This village is in Paithan taluka in Aurangabad district at a distance of about 15 kilometers from Aurangabad on the road going to Ajantha. Once Chandbhai lost his mare and was searching in vain for two months. However, with Baba’s Grace, he got his mare located unexpectedly and suddenly(side picture). A nephew of Chand Patil’s wife chose a girl from Shirdi as his wife and for this purpose the marriage party arrived in Shirdi with Baba who then appeared as a lad of 16 or 20 years old.

Initially Baba lived for four to five years under the neem tree in Shirdi, almost meditating for longer hours and wandered here and there in the forest area near Shirdi.  Baijabai would often go to forest searching Baba to offer food to Him, viz., bhakri and millet bread.  Finally, Baba came and settled living in a dilapidated masjid in Shirdi. In the masjid, Lakshmibai Shinde used to offer food to Baba daily. Baba had only a kafani, tumrel (tin pot), a piece of white cloth with which He tied His head, leaving a knot to the left, a langoti, a piece of sack as his seat, a satka, chillims (earthen smoking pipes). He had a Dhuni (sacred fire) always burning. Baba used to offer chillim to others for smoking and it was not for mere smoking. Any body having a puff from the chillim would get cured of asthma or other illness. Baba once told Wamanrao Patel that under the Dhuni in Dwarakamai in Shirdi, there lay a cave deep under the ground where Baba had lived for 12 full years and faithfully served His Master.  Baba was proficient in Hatha Yoga (dhoto-poti), cleaning intestines by taking them out through mouth and Khand Yoga (separating human parts from the trunk).

As regards Baba’s routine in the morning, Baba would get up very early in the morning and meditate for some time while sitting partly leaning on the pillar near the dhuni. No one would be there at that time in the masjid and no one would be allowed inside the masjid at that time and thus no one would get the chance of seeing even from a distance, what He was doing at that time. After some time He would chant words like, “Yaade Haq,” “Allah Vali Hai,” and “Allah Maalik Hai” and perform some yogic mudras by hands in between, signifying some communications with or directions to some unknown and perhaps to some invisible divine bodies.

In the beginning, Baba used to give indigenous medicines for curing the diseases of the people. Later He used to give UDI(holy ash) from the Dhuni(eternal fire place) to the devotees to cure their diseases and solve their other problems. After some time, Baba’s blessings only were enough to cure the devotees’ ill health, some of them chronic in nature and also solve their other problems. And later  Baba’s mere darshan or His word alone in the masjid started curing the diseases and other problems of the devotees.  Baba also cured blindness and restored vision by mere touch.